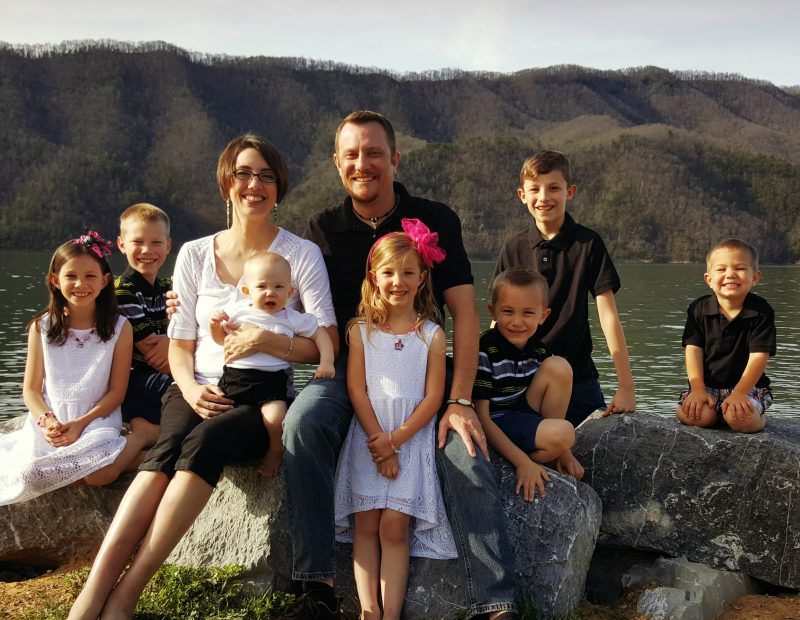 I was 35. My husband, Jacob, and I were just “coming into our lives.” We had seven children, age 14 down to 20 months. Our businesses were taking off, and we were starting to flex our wings. Taking a long weekend vacation away for the first time was something we had dreamed of doing.

My husband had a secret struggle. I knew; the kids had an inkling as they were young, but my husband struggled with alcohol addiction. Not the type in the movies where the dad gets drunk in a bar and comes home in a rage. No, this was the slow kind where it only involves more wine into the evening. Before long, after the kids had gone to bed, the slurred speech started.

In 2017, he began to struggle with some strange symptoms of body change. As we headed into 2018, he suddenly lost two belt notches, which, as any man knows, is a big deal. This occurred even though he had made no changes in lifestyle or eating habits. Things continued to get worse, and when he could no longer hold down water, I demanded he let me take him to the ER. That was the last day that our younger children ever saw their father.

The next 11 days were a whirlwind of terrible hospital events. Beginning with an intestinal puncture from a surgical procedure, culminating in exploratory abdominal surgery, and ending with his death. This all happened one week after our fifteenth wedding anniversary. That day, I left the hospital with his wedding ring in my pocket, his phone and clothes in a bag, and a horrid story to tell my children when I saw their faces next.

I walked into our home, where everything was a beautiful blend of the two of us. I sat in the office I had shared with him, expecting him to walk in and say, “what are you up to?” Or call my name from the kitchen. My heart screamed for that to happen while my mind told me it’s not going to happen. It’s the most confusing conundrum, and I wonder if it’s because your heart is blind. It doesn’t believe your mind when your mind tells it something it does not want to hear.

In the beginning, there was so much disbelief at what had happened that I was constantly reminding myself that, yes, indeed it is true, he is gone. The story of a friend who had lost her husband a couple of years before came to mind. She was a little younger than me and chose to share the story of her grief in posts on Instagram. I used to read them aloud to my husband, and we would cry over what she was going through. I also used to say things like, “I could never do that! To share like that on social media.” I always tell people that you need to be careful when you say things that start with “I could never…” because so often, those are the areas in your life where God is doing work.

So as the days wore on, I found myself writing late at night. I would finally get the children down to bed, and then be reminded of the solitude of my situation. The time I would normally spend with my husband, I now found myself alone and tired of single parenting.

In the beginning, reading was hard. I could not focus, but I found I could listen. Music has always spoken to me, and I would put on Air1 radio and soak in the lyrics and the music. God is good and I knew that He loved me more than I can imagine. I just didn’t understand the purpose behind what had happened. And I didn’t like what it meant for me.

I got angry as it felt very unfair but did not ask, “Why God?” as I didn’t feel like the answer really mattered because it wouldn’t change the here and now. I just knew the here and now hurt more than I wanted to bear, but He knew better than I. The best thing I could do was to focus on that. As the lyrics would pour over my soul and the tears would streak down my face, the words would come, and as I lay in my bed with my phone, the typing would begin.

I spoke to the Lord a whole lot more in this time. It became much more like heartfelt conversations with a close friend. I prayed for comfort, and it was there. I poured out my heart, through tears, over the things that I missed. He met me there and listened. As the ability to read returned, the first book I went to after my Bible was A Grief Observed, and I found myself commiserating with C.S. Lewis. From there, I went to the words of Elisabeth Elliot. She had lost not one but two husbands and still continued to shine the light of hope for those who had lost loved ones. I read her book The Path of Loneliness: Finding Your Way Through the Wilderness to God and then progressed to Suffering is Never for Nothing.

What I found was that I had a husband-sized hole in my heart, and the only one that could fill that hole was my Savior. So I filled my life with music that glorified Him, read His words and the words of those who had walked the path before me but continued to smile through the pain, believing that happiness was still available for them even though it felt so far away.

As the words continued to flow from the well in my soul that He filled, people began to reach out. I was able to speak to their pain, share in their stories, connect more deeply. It felt good to help others, even if it meant to sit in their tears with them, to feel their pain, to know that I was helping, helped me to heal even more.

Up until the one-year point, all my posts had been accompanied by a black image with white letters, as that was how I felt many times, pressed in by darkness. But as the Lord helped me climb out of the hole that I found myself in, after the first anniversary of my love’s death, I accompanied the posts with a background in white with black words. I had seen the hope for myself, and I had met so many others who had not yet found it that I wanted to share the hope that was in me, that they might find it and know that there was hope and a life for them too.

If this is you, there is hope for you as well. There is life waiting to be lived, complete with sunshine and smiles. You may not be there yet, but it is real, and it is coming for you too. Your suffering is never for nothing. There is hope in your journey. When you start to focus on the pain of those around you, you will find that you become a balm to their suffering and a blessing to their soul.

For more information about Sarah, you can check out her website.