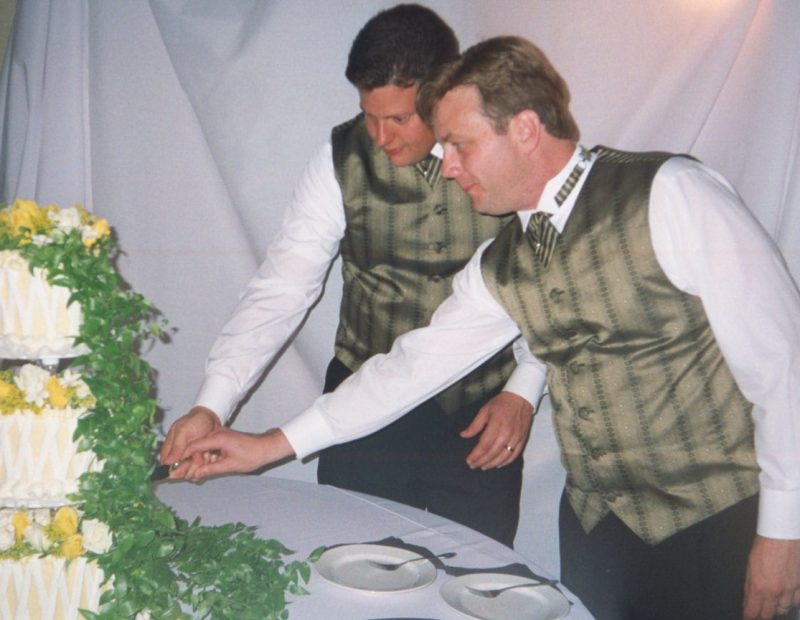 What if I were to tell you I was grateful for losing my husband? Would I sound callous? Inhuman? Heartless?

What if I were to tell you I was grateful for losing two? How would you describe me then?

The truth of the matter is, I am grateful, and let me explain why.

In 1995, my first husband, Bob, died. It was six months between finding the lump and his taking his last breath. We met in 1988, I was 21, and he was 28. Both young, both full of life, both with long futures ahead of us. Until that future together was taken away, and I had to face a life without him. 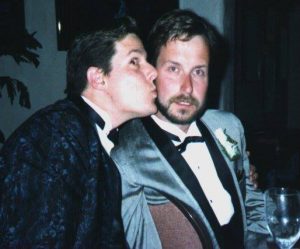 I was lost. I didn’t know where to turn or what to do. I’d never lost someone so significant in my life, so I never learned a healthy and proper way to grieve. Instead, I tried to numb my feelings. I started with a bottle or two of wine, and by the time I figured out what I needed to do, I’d be passing out each night after several bourbons.

At the same time, I was going to a weekly bereavement support group hosted by the hospice facility that took care of him in the last few weeks of his life. It was here, with this group of men and women, all of whom were older than I, that I learned I had to do work to get through this pain. I actually had to take the time to redefine who I was when I was no longer a husband, partner, caretaker, half of “we.”

The positive work I was doing in the group, and the negative actions I was taking at home, were incompatible. I had to make a choice and I needed to do something to get out of the negative emotional spiral I was in. I was only 30, and I had many more years of life to go. Cutting down on the alcohol was the first step. I then increased the time to focus on myself and my healing. I started writing a book because I felt other people needed to know about grief.

That manuscript was called On Grief: One Man’s Journey. It was basically my journal entries for the prior two years with some hindsight and insight tossed in for good measure. I was, after all, an expert at 30 years old. I knew everything there was to know, or so I thought. The book stayed on my hard drive, encrypted, from 1997. Writing in my journal, writing the book with self-reflection, and attending those weekly support group meetings were precisely the things I needed to do. Doing so got me to a point where I felt relatively normal and could heal.

It was also around the time I felt comfortable to dip my toe in the dating pool again. It had been nine years since my last date. And it was also around this time that I took action and made a significant career change. What I knew was this: I couldn’t get better in the same space I was in, mentally or physically, with the job I had. Massive change and upheaval were needed.

It was nearly another year of dating and consulting in my new job when I met my second husband, also named Bob. From the moment we met, there was a spark in his eyes that captured my heart and terrified me at the same time. Here I was, a widower, damaged, starting to look at a serious long-term relationship. What was I thinking?

We met in Memphis while I was working there. I knew nothing of the city except for the blues, Elvis, and bar-b-que. We became inseparable, and he moved to California a few months later. Our commitment ceremony (still not legal) in 1998 was over the top. We were surrounded by friends and family and members of my bereavement support group; they had become my second family. They had seen the struggles to get to that point in my life. I’d even say they saw more of my pain than my primary family.

As with most couples, we enjoyed a honeymoon phase. After a few years, we needed to be reminded of why we were together. Eventually, the thought of becoming parents entered into our reality. There was a need for foster parents, and we were ready to help with that need. We opened our hearts and home and were investigated until we were licensed. We did the same process with the county adoption agency. 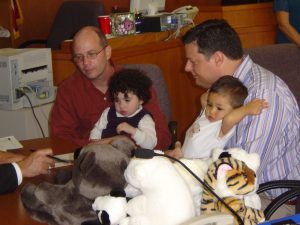 The adoption of our two children was finalized in October 2004. They were, at that point, slightly over 2.5 years and 11 months old. It was something I’d never thought possible once I admitted to myself that I was gay. And, wow, did I enjoy being a dad!

But there was one thing that made it difficult: I traveled a lot for work. I was gone most of the week, if not a few weeks at a time, and was home on weekends. I missed a lot of their younger years while I worked to take care of my family. Video conferencing into my toddler’s birthday party was no fun.

It wasn’t a perfect relationship (neither were, in all honesty), but we did do our best to keep the family intact and remind ourselves why we got together in the first place. After a dozen years, Bob was ready to leave California and find somewhere with seasons to enjoy, as he did when he was a child. I was prepared to leave my birth state due to some political decisions and the fact that I was working more on the east coast anyway. At that time, 2011, there were very few states that recognized the legal marriage and family unit we’d created, and we settled on Massachusetts to call home.

We found a quaint town, an old Victorian-style home, and moved in the summer of 2011. Bob became a fixture in the schools as a parent and an advocate for our kids. He made friends quickly, worked with the PTO, and eventually decided to run for School Committee. He lost by a few hundred votes, but he did very well, considering he was an outsider in a small town.

It was a Friday, two and a half years later, in January 2014, when I arrived home at 2 AM to snoring and slept in the guest bed. A few hours later, that same morning, I got up and took the kids to school and myself to a doctor’s appointment. When I got home, the snoring had stopped, and I saw what I saw. Paramedics were unable to revive him; the hospital was the same. His memorial service in this newly adopted town was standing room only, and I heard eulogy after eulogy of someone I didn’t fully recognize.

Here’s where gratefulness comes into play.

I had two pre-teens I needed to walk through their grieving. They needed to know healthy ways of expressing grief and anger and every other emotion related to their primary caregiver’s death. My life turned upside-down, as I could no longer do my job because I couldn’t travel. I was suddenly a single parent in a town I knew little about.

But I knew what to expect. I knew which emotions I should anticipate feeling, and I knew which ones I needed to model to my kids. “It’s okay to cry,” I told them. “You can miss him, and you can be angry at him, and you can do both at the same time.” I didn’t have the opportunity or luxury to drink myself to sleep every night; I had two little ones that needed me.

Seven years later, almost to the day, I published my memoir, Life After Losses. I was finally able to accomplish what I couldn’t in 1997. Now, I could tell a story about how I recovered and how I used the lessons learned from my first loss into my second loss. I could finally find meaning in my first loss, and I was grateful for it because it helped me recover from the second loss.

And I became appreciative of the second loss, which allowed me to have that perspective of the first loss. I became grateful that I could acknowledge the gifts each life and loss gave me.

Do I still sound heartless? Or have I learned life lessons out of those losses? I learned a long time ago we never get over our grief; we learn to live with it. I’d rather live in a place of gratitude for what I have been given than a place of sorrow.

For more information on James LaVeck, check out his website.